They'e Selling Postcards of the Hanging 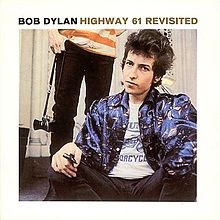 A few posts ago I got into a debate with George, Scott and Walter about posting what we thought were the top 10 albums of all time.
George has already done so and was encouraging us to do the same.We mostly felt that this was a moveable feast with five or six obvious ones with the rest changing over time and depending on one's mood on a particular day.
One album which would definitely feature in my list would be Highway 61 Revisited,  Bob Dylan's 6th studio album from 1965.
This song needs no words from me.
It is absolutely majestic and a shining example of the work of the greatest poet and songwriter on the planet