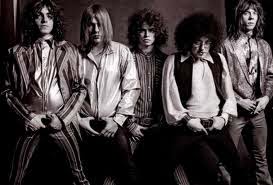 This week's random selection is Uncut's Unconditionally Guaranteed 6 from July 1999.
Playing it in the car on the way to work this week, which is the nearest thing I get to research, and MC5 appeared on track 2 with 8 mins 35secs worth of Kick Out the Jams merging into the Stones Empty Heart.

Right, I thought, this is going on unless anything better appears on the next 15 tracks. You will have worked out by now that nothing did.
Recorded in March 1972 for a live TV show (which immediately conjures up visions of folk spluttering their tea everywhere) it was released as part of an album Thunder Express in 1999.
Detroit's finest at their most incendiary - oozing passion, talent, energy and noise.
I was never blessed with any musical ability. Had I been I would have longed to be in a band that could make sounds like this.

MC5 - Kick Out The Jams/Empty Heart
Posted by Charity Chic at 08:00