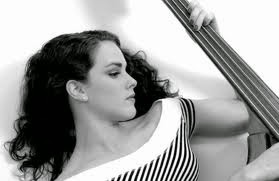 I used to be a fairly frequent purchaser of Mojo and Uncut as anyone who has read my Saturday Lucky Dip series can testify.
However there are only so may 30 page spreads one can take on Michael Stipe's inner angst or the legacy of John Lennon.
So now I only ever purchase if I'm going away for a few days and looking for something to read and some new music to listen to.
To this end I recently bought the August Uncut and sure enough there is a 30 page article about Eric Clapton farting in the 70's.
There is however also a terrific CD of new music with lots of artists I am not familiar with to check out.
Peter Matthew Bauer,William Clark Green, Papercuts, Sam Doores and Polly & the Billet Doux seem to be the pick of the bunch.
Then there is an achingly beautiful song called Rabbit by actress, singer songwriter and upright bass player Amy LaVere. It puts me in mind of Jenny Lewis..
It is from her new album Runaway's Diary on Archer records.
I am somewhat reticent about posting such a new tune but I figure if it is being promoted via Uncut it may be ok to promote it via other forums.