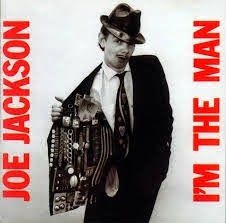 I'm The Man  the 1979 second album from Joe Jackson got a rare airing recently and very good it is too.
The successor of Look Sharp also released in 1979 and the predecessor of 1980's Beat Crazy.
The album generated Joe's biggest chart single It's Different For Girls which reached the dizzy heights of number 5 in the UK singles chart.
However you are not getting that. Rather you are getting tracks 2 and 3 Geraldine and John followed by Kinda Kute
Joe appears in the role of a spiv on the album cover with the album reaching number 22 in the UK charts and number 101 in the States.
Fairly shortly thereafter Joe began to meander down the jazz route.
No discerning record collection, however, should be without his first two albums.
He once had a pint of Guinness in Portsmouth with a pal of my pal Raymie.