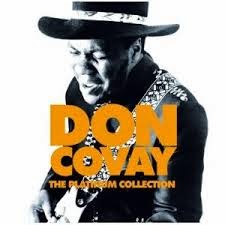 Donald Randolph, better known as Don Covey has previous featured on SSS 3 as Don Covay and the Goodtimers from the great Sanctified Soul album and as part of The Soul Clan on SSS 41

These two songs from 1965 are taken from Don Covay - The Platinum Collection on Atlantic
Don Covay was born in Orangeburg, South Carolina in 1938 before moving to Washington and is thankfully still with us.
Like many of his contemporaries he started in a gospel group, in his case a family group The Cherry Keys (not to be confused with The Cherry Tree, a pub in Netherton) prior to going down the secular route with the Rainbows a band that often featured Marvin Gaye.
He was also a chauffeur for Little Richard, which must have been an interesting gig.
As well as a singer he has written songs recorded by Aretha Franklin, Wilson Pickett, The Rolling Stones and The Small Faces amongst others.

I'm beginning to struggle for material for this series. I'll struggle on to 50 then take stock with either more tracks from some of those previously featured or else a more generic Soul Sunday feature.

Don Covay - Come See About Me
Posted by Charity Chic at 08:00