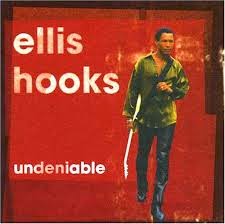 Ellis Hooks first came to my attention when his 2002 debut album on Zane records Undeniable featured on the Paul Jones Rhythm and Blues show on BBC Radio 2.
Accordingly it has always been filed in the Blues section but a recent play suggests that it would be equally at home in the Soul section.He puts me in mind of the likes of Little Milton and Eddie Hinton in this respect.
Born in Alabama in 1974 to a Cherokee mother and an African American Baptist sharecropper he was the 13th of 16th children
He hitched across the States and Europe prior to ending up busking in New York in his mid 20s
He recorded 7 albums between 2002 and 2007 with names like Dann Penn, Steve Cropper and Wayne Jackson involved
Oh and Ernie just to reiterate it is Ellis Hooks we are featuring today and not the mighty Elkie Brooks!

Ellis Hooks - Something 4 Everyone

Ellis Hooks - Your Love is Too Strong
Posted by Charity Chic at 08:00