An Icelandic Singer who is Bjork 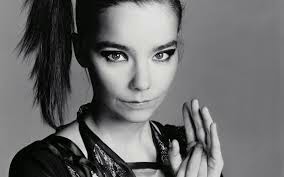 This is to give me an excuse to feature It's Oh So Quiet her jazzy swing single which spent 15 weeks on the UK charts in 1995 peaking at number 4 and which represents her biggest hit single to date. I picked up a copy for 50p fairly recently.
It is a cover of a song which was first released in 1951 by Betty Hutton as the b-side to Murder, He Says.
It in turn is a cover of a German song "Und jetzt ist es still" performed by Horst Winter in 1948
There is also a French version from 1949 "Tout est Tranquille" performed by Ginette Garcin and and the Jacques Helian Orchestra.
Bjork is one of those artists I never really got at the time but I find myself enjoying more of her stuff as I get older.

Bjork - It's Oh So Quiet

pulled by the blog police
Posted by Charity Chic at 08:00