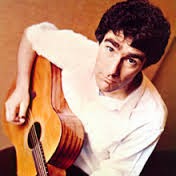 Nic Jones' 1980 album on Topic records Penguin Eggs was voted the 2nd best folk album of all time on the BBC Radio 2 Mike Harding Folk Show - second only to Fairport Convention's Liege and Leaf.
I was not familiar with it but having watched an inspiring documentary on BBC4 on his recovery from a serious road accident in 1982 which resulted in many broken bones and temporary paralysis I thought I would make it my business to acquire it.
And what a terrific album it is too- 9 tracks , mainly traditional and with a nautical theme, and not a dud among them.
For those like me wondering as to the origin of the album title look no further than the lyrics of The Little Pot Stove where to the crew of a whaling ship fresh penguin eggs are seen as a culinary luxury.
Despite permanent injuries following his accident which have impinged on his guitar playing and stopped him playing the  fiddle he has made a welcome return to music as part of  the Nic Jones Trio -with his son Joe amd Belinda O'Hooley and as a duo with his son.
If you get the opportunity watch the documentary The Enigma of Nic Jones - Return of Britain's Lost Folk Hero it will be an hour of your life well spent