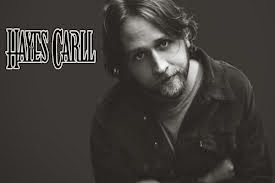 The two tracks featured today are the first and last songs on Trouble in Mind  a 2008 album by Houston's Hayes Carll.
The first one is co-written by Ray Wylie Hubbard who has also performed it.
The second , which was the Americana Music Association Song of the Year in 2008,  would perhaps not be out of place on Jim McLean's rabbit's Gospel Sunday.But then again, maybe not.

Trouble in Mind is the follow up to the equally splendid Little Rock from 2005 both of which I would thoroughly recommend.
This particular jury is, however, still out on the strangely named KMAG YOYO from 2011 which thanks to the power of the internet I have just discovered is a US Army acronym for Kiss My Ass Guys You're On Your Own.

Hayes Carll - She Left Me Fo rJesus
Posted by Charity Chic at 08:00