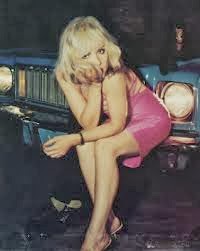 I had a notion to play some early Blondie and went looking for Plastic Letters - but to no avail.
I was pretty sure I had it: I definitely did at one stage. I shall look out for a replacement copy on my travels.  I got it after Parallel Lines even though it pre- dates it  - i.e after they became famous.
I can think of other such examples - purchasing Bleach by Nirvana after Nevermind for instance
I watched an interesting  documentary about Blondie recently graphically illustrating how they imploded.
They were pretty much the perfect pop band for a while and early doors before the hits started rolling out there was a degree of raw energy in their songs.
Red eye shadow! Green mascara indeed!

Blondie -Rip Her to Shreds
Posted by Charity Chic at 08:00