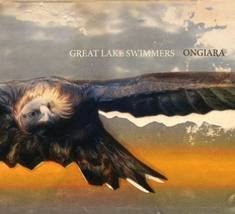 Ongiara is a 2007 album from the Canadian band  Great Lake Swimmers
According to a certain online encyclopedia it is also the name of the ferry which transported them to Toronto Island where they recorded the demo of the album.
More impressively it is the original name for the Niagara Falls -the name is said to have originated from the Iroquois word Onguiaahra and the local tribe ofIroquois inhabitants known as the Ongiaras.

I saw them play in the Admiral Bar in Glasgow when we went along to see Will Johnson who was the support act.
They were very good. There are obvious similarities to The Fleet Foxes who were coming to the fore around this time.

The magnificent CD cover of an eagle (or maybe sea eagle?) can best be viewed when fully folded out

Great Lake Swimmers - Backstage With The Modern Dancers
Posted by Charity Chic at 08:00