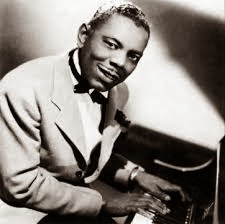 Some of the folk in the Blues Collection I've heard of, some I've never heard of and some like Champion Jack Dupree are somewhere in the middle - I've vaguely heard of but am not too familiar with their stuff.

William Thomas Dupree (1910 -1992) as the picture would suggest was a blues pianist.
He had an itinerant lifestyle travelling throughout the States before moving to Europe in 1960 living in Switzerland, England, Sweden and Germany where he died in Hanover.
The album focuses on an early part of his career from 1940 to 1945
The sleevenotes advise that although relatively young he had experienced much by then and that he observes life with a wordly eye.
There are songs about chain gangs, jail ,drug addiction and of course bad whiskey and bad woman.
It seemed he lived the life expressed in the songs.
The first track was recorded in Chicago on 27th November 1941 and the second in New York in 1945.