All You Kids that Just Sit and Whine 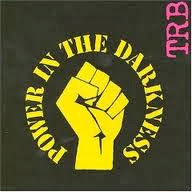 All you kids that just sit and whineYou should have been there back in '79You say we're giving you a real hard timeYou boys are really breaking my heartSpurs beat Arsenal, what a gameThe blood was running in the drainsIntercity took the trainsAnd really took the place apartThat was the year Nan Harris diedAnd Charlie Jones committed suicideThe world we knew busted open wideIn the winter of '79

These two songs from Power in the Darkness the debut album from the Tom Robinson Band in 1978  could arguably  have been written yesterday.
With the rise in the number of soup kitchens and food banks and with the increase in the popularity of the odious UKIP leading to xenophobic and  knee jerk reaction politics from the Mail, Express and the other political parties it looks like we may once again be entering a dark place.
However as Tom puts it in the sleevenotes "if music can ease even a tiny fraction of the prejudice and intolerance in this world, then it is worth trying"
Sadly we do not appear to be getting the songs or artists highlighting this as we did back then.

As Serious Drinking were want to say "The Revolution starts at closing time" although regrettably a pint of beer now costs considerably more than 10 bob.

Tom Robinson Band - The Winter of '79