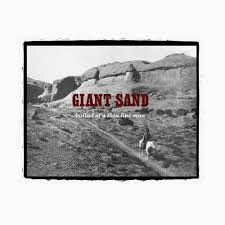 It is time for a little slice of desert noir courtesy of Giant Sand.
Operating out of Tuscon, Arizona there have been many members over the years with the constant main man being Howe Gelb - a kind of American The Fall if you will.
Here on 1986's Ballad of a Thin Line Man he is joined  by Scott Garber on bass, Tom Larkins on drums and his then wife Paula Jean Brown on vocals and guitar (another Fall comparison).
John Convertino and Joey Burns of Calexico fame feature later on in the Giant Sand story.
You are getting one of Howe's own compositions plus a quite magnificent version of the Johnny Thunders classic.

Giant Sand - You Can't Put Your Arms Around A Memory