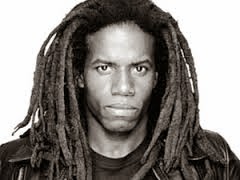 Mrs CC came in the other day with a charity shop purchase The Essential Eddy Grant CD.
This led me to getting out my vinyl copy of Eddy Grant -All the Hits for a quick compare and contrast.
The track lists for these compilations are virtually identical with two crucial exceptions.

The CD includes his great 1988 single Gimme Hope Jo'anna a joyous song but one with a message strongly attacking apartheid. Number 1 in Germany apparently.
I suspect my vinyl version was issued before this song was released.
More surprisingly the CD version does not include 1982's Electric Avenue.
Two good reasons to retain both formats and an excellent excuse to post the two aforementioned tracks.