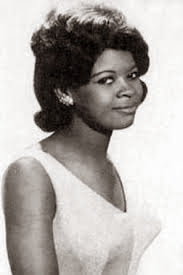 Irma Lee, the Rose of New Orleans was born in Ponchatoula , Louisiana in 1941 and is better known to you and I by her married name Irma Thomas.
These two tracks are taken from Time is on My Side an excellent Kent compilation of some of her great songs from the Minit and Imperial labels between 1962 and 1966.
Time is on My Side was of course subsequently covered by the Rollling Stones. Apparently Irma was less than impressed with their version and had an aversion to performing the song on stage except in response to persistent requests.
She subsequently recorded for Chess in 1967/68 before moving to a variety of smaller labels prior to opening the Lion's Den Club in New Orleans where she cooks as well as sings!
I'm glad to report that she is still going strong.

Irma Thomas - Time Is On My Side

Irma Thomas - You Don't Miss a Good Thing (Until It's Gone)
Posted by Charity Chic at 08:00