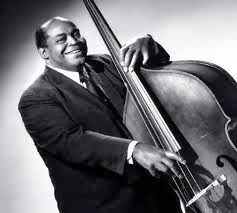 Following on from Koko Taylor here is the first of the other 21 artists featured in my recent Blues Collection acquisitions and just the thing to blow those New Year cobwebs away.
Willie Dixon (1915-1992)  sang, played the double bass and guitar but was perhaps more famous as a producer and arranger and in particular a songwriter.
And what songs! I Just Want to Make Love to You, Hoochie Coochie Man, Spoonful, You Can't Judge a Book by It's Cover - songs that went on to be hits for the likes of Muddy Waters, Howlin' Wolf, Little Walter and Bo Diddley
On the first song from 1955 Willie is doing the singing as well as playing the bass.
On the second from 1961 Howlin' Wolf does the vocal honours with Willie once more contributing on bass. This song was covered by a band in the 60's the name of whom is on the tip of my tongue and which will eventually come to me!
Willie rightly began to get a bit pee'd off being ripped off by other musicians and not receiving the copyright, royalties and recognition he deserved and he successfully sued Led Zeppelin for plagiarism.
Go on yourself Willie and rest easy

Willie Dixon - Pain in My Heart