On this New Year's Day can I join with Mr Prophet is wishing you all a Happy New Year and all the best for 2014.

I know that New Year can be a difficult time for some particularly those who have lost a loved one.
It can be a time for reflecting and looking back as well as a time for looking forward.

In this vein, and in what I suspect may become an annual tradition, CCM is going to take this opportunity to pay tribute to two iconic figures who both died on the 1st of January albeit 44 years apart. 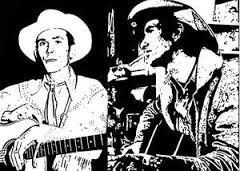 Hank Williams, the Hillbilly Shakespeare, died on 1st January 1953. Incredibly, he was aged just 29.
Fortunately he was pretty prolific and has left us with a legacy of  astonishing songs which have stood the test of time.
Undisputedly one of the greatest singer songwriters to have ever graced this planet.

Another flawed and troubled genius Townes Van Zandt died  44 years later on 1st January 1997 aged 52.
Although he never enjoyed commercial success he has always been held in high regard by other artists many of whom have recorded his songs.
In Glasgow there used to be an annual event whereby local artists would gather and pay tribute to Townes with versions of his songs.