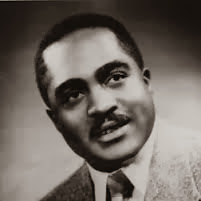 As I have previously mentioned I recently purchased 22 CDs from a series called the Blues Collection from my local charity shop.
I went in last week and there were a further 17  on display which I duly purchased!
My research tells me there are 90 in the series plus 3 Christmas CDs so I am nearly half way there!! A long term project I feel.

This is one of the new 17, chosen at random - Ain't Nobody's Business by Jimmy Witherspoon (1920 -1997) - someone whom I had not previously heard off.
A friend of mine is fond of saying that "The Blues is a broad church" a phrase which I suspect you may hear repeated as this series progresses.
It looks as those Jimmy started off  preaching from the pulpit as a jump blues singer prior to wandering off down the jazz aisle.

Indeed the 2 songs featured as from his performance at the Monterey Jazz Festival on 2nd October 1959 the first being a Big Bill Broonzy song and the second one of his own.
I'm not the world's biggest jazz fan and some of the other songs on the record are a bit twiddly for my taste.
However, these two are rather good.
Take it away Spoon

Jimmy Witherspoon - When I Been Drinkin'