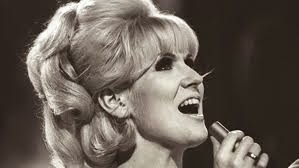 This week's featured artist is Mary Isobel Catherine Bernadette O'Brien from West Hampstead, London.
An unusual moniker for a Southern Soul artist I hear you say.
She was however better known as Dusty Springfield and her 1969 album Dusty in Memphis is undisputedly on of the greatest Soul records of all time.
On Atlantic, it was produced by Jerry Wexler, Tom Dowd and Arif Mardin with the Memphis Cats as her band and The Sweet Inspirations as her backing singers.
The most famous song from this album was Son of a Preacher Man which may feature at a later date.
However the two songs featured today are
Track 1 Just a Little Lovin' written by Barry Mann and Cynthia Well and the title of the tribute album by Shelby Lynne which has previously featured on CCM here  and
Track 6 Breakfast in Bed by the great Eddie Hinton here and Donnie Fritts who shall shortly feature.

This album was undoubtedly the pinnacle of her career but she had a tremendous voice and produced some great great songs.
Sadly she died of breast cancer in 1999 at the age of only 59.
A true legend.

Dusty Springfield - Breakfast in Bed
Posted by Charity Chic at 08:00