It's A Family Affair 5 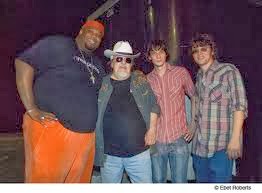 For this week's offering we head to the swamp lands of Mississippi to touch base with the Dickinson Family.
Jim Dickinson (1941-2009) was a legendary record producer. He could also play and sing a little fronting the Memphis band Mud Boy and the Neutrons.
He worked with such varied luminaries as Bob Dylan, Big Star,Ry Cooder, The Cramps and the Rolling Stones and produced many many bands including Green on Red,Big Star, Willy de Ville and The Replacements

Jim's boys Luther and Cody, together with Chris Chew are the North Mississippi Allstars with whom Jim is pictured above.
Luther is also involved with the Black Crowes whereas Cody's side project The Hill Country Revue have previously graced these pages here

Jim Dickinson - Down in Mississippi