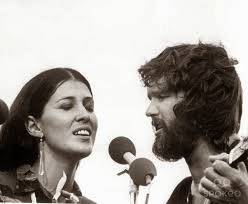 Kris Kristofferson and Rita Coolidge were married from 1973 to 1980.
During this period they recorded 3 albums together as Kris and Rita - Full Moon (1973), Breakaway (1974) and Natural Act (1980)
I picked up Full Moon  the other day in reasonable condition for a pound.Somewhat surprisingly the songs are not all their own compositions
First up is a song by Rod Parish with the second from the pen of Stephen Bruton who also features of the album.
They are no Gram and Emmylou but their music is not unpleasant