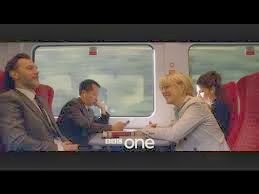 There was a recent BBC Drama called The 7.39 about two commuters (Sheridan Smith and David Morrissey) striking up an acquaintance on a commuter train (the 7.39) which in turn leads to a "steamy affair" to use the tabloids parlance.
Given the strange way my mind is wired it immediately put me in mind of Excuse Me a track from Wreckless Eric's 1980 album Big Smash.
Now my copy of Big Smash is a single album but when doing my research it seems that it was a double album with the other half comprising of a compilation of older material - strange that.
Mr Goulden  is now happily married to Americana artist Amy Rigby, living in Catskill New York State and still  happily going strong.
He really is an Eccentric National Treasure and joins such other ENT's as Robyn Hitchcock, Julian Cope and Ian Dury in gracing the pages of CCM. I can feel a series coming on!

Wreckless Eric -Can I Be Your Hero?
Posted by Charity Chic at 08:00