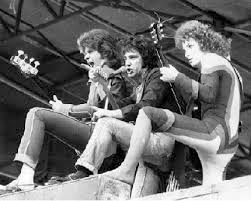 I'm not a huge fan of live albums.
However one of my favourites is The Sensational Alex Harvey Band Live at the Hammersmith Odeon on 24th May 1975.
I had this on pre-recorded cassette and when the chance arose to purchase it on vinyl for a pound it was too good an opportunity to pass up.
Alex Harvey was quite simply a Scottish musical legend. He was the epitome of the Scottish word gallus all swagger and poise and with a slight air of menace.
SAHB consisted of Alex on vocals, Hugh McKenna on keyboards, Ted McKenna on drums, Chris Glen on bass and the clown faced Zal Cleminson on guitar.
Sadly Alex died on the 4th of February 1982 a day before his 47th birthday from a massive heart attack whilst waiting for a ferry at Zeebrugge.
SAHB are probably best remembered for The Boston Tea Party and their stonking version of Delilah.
However they had many other great tunes including this - Side 2, Track 1 of Live.
Sensational!

Sensational Alex Harvey Band -Give My Compliments to the Chef