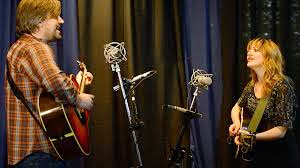 No sorry to disappoint you not a collection of lullabies  but  rather songs adapted from the traditional versions collected by Sir Francis James Child and published in The English and Scottish Popular Ballads (1882-1898).
Being folk songs they tend to be about murder, betrayal, cuckolding and such things.
Anais Mitchell and Jefferson Hamer released a terrific album Child Ballads in 2013 with versions of seven of these songs, one of which is featured here.
Child's ballads have been covered by many folk artists over the years as demonstrated in this terrifically informative post from Cover Lay Down here