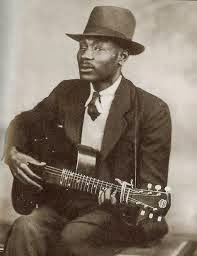 No Blues Collection worth it's salt would be complete without a smattering of blind performers.
So here is the first, but not the last. Fulton Allen (1907- 1941)  better known to all as Blind Boy Fuller.

Operating out of Durham, North Carolina he wasn't born blind, but due to illness he began to lose his sight in his mid-teens and was totally blind by 1928.
His lack of sight led to him seeking employment as a musician.
Now I realize that there has been a dearth of washboards on CCM recently so here from New York on the 25th of July 1935 is Blind Boy Fuller on vocals and guitar, Blind Gary Davis on guitar and the presumably sighted Bull City Red on washboard on Baby You Gotta Change Your Mind.
I've absolutely no idea what a Shimmy is but I'm reasonably confident that I was shaking mine along to this fine song from 15th December 1937 where Blind Boy is accompanied by Floyd Council on guitar.

Both tracks are nearly 80 years old but are still incredibly powerful and well worth a listen.
Enjoy