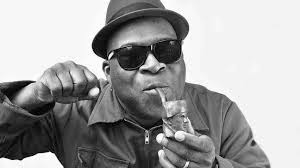 Barrence is a Boston based, internationally followed; Rockabilly, Roots, Jump Blues, Funk and Soul  singer in the vocal decimals of Little Richard and James Brown. You won't just have a good time, You will have a Kick Ass Good Time!

So says his website - and who am I to argue.
I've just stumbled across Dig Thy Savage Soul released in September 2013 the first Barrence Whitfield and the Savages album for 8 long years.AND it's on Bloodshot too!
I was going to say it is worth the wait but that is really too long a period to be deprived of his energy and enthusiasm.
He used to be championed by Andy Kershaw and I have a few of his songs on mini disc from back in the day when I used to record Kershaw, Mark Lamarr's Shake Rattle and Roll and the Paul Jones show.
Lots of good stuff gathering dust in a cupboard somewhere -must get round to transferring it sometime. Another long term project.

Anyway back to Barrence - his real name is Barry White but let's face it there is only room for one Walrus of Love!
Think I can get away with posting this as it is freely available to download on the Bloodshot Soundcloud

Barrence Whitfield & The Savages - The Corner man
Posted by Charity Chic at 08:00