Hello, This Is Joni 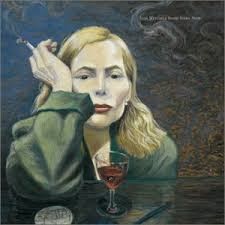 Panic not, you are not getting the awful "Hello This is Joannie (The Telephone Answering Machine Song).

No rather you are getting the music of Roberta Joan Anderson of whom Mrs CC is rather fond.
As you have probably sussed from the picture she is better known as Joni Mitchell ,CC (that is Order of Canada as opposed to Charity Chic).
I am in the good books this week by returning from the library with a 10 CD Box Set of her Studio Albums 1968 -1979.Obviously I would never download them as that would be illegal.
They range from the very good such as Blue and and Ladies of the Canyon to truly awful  experimental  jazz albums such as Mingus.
In true CC (that is Charity Chic not Order of Canada) fashion you are getting two songs from her 1969 album Clouds previously purchased in a charity shop in Newton Stewart along with her 2000 album Both Sides Now with the above self portrait on the cover
This album and the song Both Sides Now apparently featured in that dreadful rom- com Love Actually and the guy in the shop advised that they had been donated by a woman who had seen the film ,bought the records and subsequently didn't fancy them.Her loss, our gain.

Joni Mitchell -That Song About The Midway
Posted by Charity Chic at 08:00