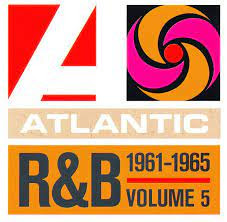 I picked up Atlantic R&B Volume 1 1947 -1952 a few years ago and the plan was to get round to picking up the other seven volumes.
For years nothing happened but the pace has been stepped up significantly over  the last few months with me acquiring Volumes 3 and 4 in a Charity shop in late April/early May.
Now on my recent visit to Missing Records I came away with Volumes 5 to 8 for a tenner. So now I'm keeping my eyes peeled for Volume 2 to complete the set.
Volume 5 covers the period 1961- 1965 and features the likes of Solomon Burke, Otis Redding, Joe Tex and Don Covay. All legends who have graced these pages before.
I've decided to feature some of the ladies today.Barbara Lewis and Doris Troy make their debuts whereas Esther Phillips has appeared here before as Little Esther Phillips as part of my Little & Large series.
Barbara Lewis - Hello Stranger
Doris Troy - Just One Look
Esther Phillips - Release Me
Posted by Charity Chic at 08:00