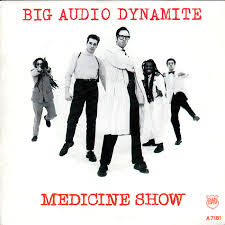 I'm quite enjoying mixing my genres in this series.
Both songs today could easily have  been matched with someone much more similar but where is the fun in that?.

Today's little is Esther Mae Jones a Soul and Blues artist who recorded as Little Esther Phillips.
She started as a singer in Johnny Otis' band but her career was dogged by drug addiction sadly leading to an early death in 1984 at the age of 49.
This song is taken from a Mojo Compilation - Music Guide Vol 3 - Raw Soul.

Medicine Show was the third single from This is Big Audio Dynamite the debut album of the band formed by Mick Jones after leaving The Clash. Released in June 1986 it was in the charts for 5 weeks peaking at number 29
Don't be fooled by imitation
This is the stuff that cured a nation