Let's Get Out Of This Country 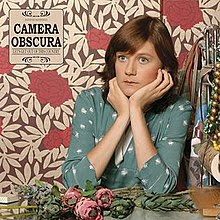 I got the Tracyanne and Danny album for my birthday.
It is excellent. Playing it highlighted a major gap in my record collection - a distinct lack of Traceyanne Campbell's band Camera Obscura. The only thing I have is a burn of their last album Desire Lines
Given that I also received the modern equivalent of a record voucher I decided to do something about it.

I was torn between Let's Get Out of This Country and My Maudlin Career so I did the sensible thing and got them both.
From 2006 and on the Spanish Elefant Records label LGOOTC is the older of the two.
You should all be familiar with Lloyd, I'm Ready to be Heartbroken. I posted it just over a year ago but it merits being posted again.
The title song was also a single and again is not too shabby.
MMC will feature in due course. Other birthday purchases will feature shortly.

Camera Obscura - Let's Get out of This Country
Posted by Charity Chic at 08:00