This Song is Inspired by Robert Louis Stevenson 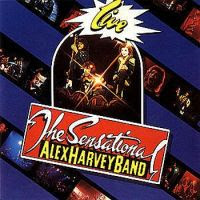 I'm not really a fan of live albums and I suspect I probably only have a couple of dozen if that..
My favourite is undoubtedly The Sensational Alex Harvey Band Live at the Hammersmith Odeon on 24th May 1975.
First owned on cassette and subsequently upgraded to second hand vinyl for a quid when you could by vinyl at sensible prices.
The Tomahawk Kid  followed by Delilah. With all due respect to Sir Tom this is THE definitive version.

Partly inspired by the homage to Alex Harvey on the recent BBC Rip it Up documentary and a newspaper article featuring Ted McKenna extolling the virtues of fellow drummer Keith Moon.