Disco Friday #5 - Boogie On Down 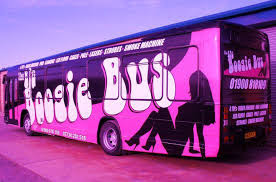 It's Boogie Night on Disco Friday this week so all aboard the Boogie Bus and Boogie Oogie Oogie til you just can't boogie no more,
Two bona fide boogie classics from Disco Legends .Forty floor fillers or thirty eight if you exclude The Nolans and Lee Garrett.

Somewhat criminally Boogie Nights by Heatwave only reached number 2 when it charted in January 1977. They went on to have a further seven hit singles (eight if you include a remix) but I suspect that like me you may well be pushed to name any of them.
A Taste of Honey were less prolific with Boogie Oogie Oogie being their only hit single reaching number 3 in 1978 and number 59 second time around in 1985.

Boogie nights are always the best in town. Keep on dancing.

A Taste of Honey - Boogie Oogie Oogie
Posted by Charity Chic at 08:00