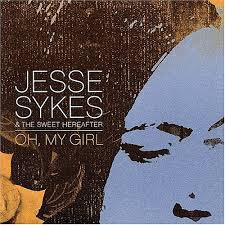 Another glaring hole in the shelves filled - this time in the Americana section.
I'd the occasional song by Jesse Sykes and the Sweet Hereafter on compilations but none of their albums. That has now changed.
2003's Reckless Burning and 2004's Oh, My Girl on the Barsuk Records in the States and the French label Fargo in Europe have been duly purchased.
A band pretty much at the other end of the spectrum from yesterday's featured artist Camera Obscura.

Sparse. Dark. Gothic. Brilliant.
The kind of music that once it is finished you feel the urge to go and lie down in a darkened room. But in a good way.
Oh, My Girl today.,Reckless Burning in due course (once you have recovered)

Jesse Sykes & the Sweet Hereafter - The Dreaming Dead
Posted by Charity Chic at 08:00