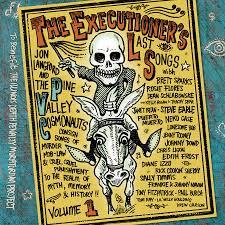 Yesterday's posting of Delilah immediately put me in mind of the Executioner's Last Songs a project by Jon Langford and the Pine Valley Cosmonauts.
Where they consign songs of murder, mob-law and cruel ,cruel punishment to the realm of myth, memory and history with any proceeds going to benefit The Illinois Coalition Against the Death Penalty. A worthy cause as I'm sure you will all agree.
They are joined by various guests on 18 great interpretations all of which are worthy of a feature.
After due consideration I've gone for Dean Schlabowske's version of the great Gary Gilmore's Eyes by the Adverts and Jenny Toomey's take on Cole Porter's Miss Otis Regrets.

The good news is that there are a further two volumes.The bad news for some of you is that's the next two Tuesday's sorted.