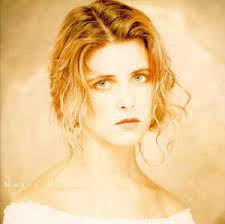 There have been plenty of occasions round these parts when records have been bought twice and maybe even three times, but I am pretty confident in stating that Maria McKee's solo debut album is the only one ever bought on four occasions.
Let me explain.
I bought the  album a good number of years ago, in Echo on Byres Road I think.
Then a couple of years ago I bought the CD version as it has the magnificent but bonkers Drinkin' in My Sunday Dress on it which is not on the vinyl version.

Then I bought a copy in Oxfam in Victoria Road as a housewarming present for a pal who had just moved into a flat. Turns out he already had it.

Then as part of my birthday presents package Mrs CC gave me a copy she had picked up in Oxfam in Newton Mearns not knowing/forgetting that I already had it on vinyl!
It's the thought that counts!
Wonder if it is the same one - must check.*

A good enough excuse to feature a couple of tracks

Maria McKee - To Miss Someone