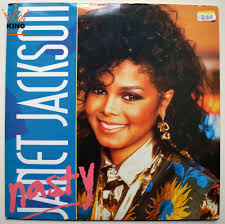 Today we see Val's nasty side or to be more accurate Janet Jackson' Nasty side.

From 1986 and from her third album Control Nasty is one of the 78 singles (I'll type that again 78 singles) released by Ms Jackson.It reached number 19  in the UK singles charts.

I feel that I can say with a degree of confidence that I have never knowingly listened to any of her 78 singles.I may recognise some of them having heard them subliminally although thankfully not this abomination.. To make matters worse it is the extended version. It will not be a keeper.

Val's vinyl also contains a record by her brother namely Off the Wall. While the music undoubtedly will be of a superior quality to this pap it will not be featuring here.

Janet Jackson - You'll Never Find (A Love Like Mine)