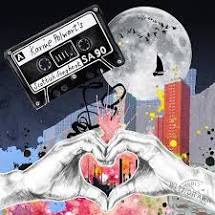 I wasn't sure of this at first.

I mean to say folk goddess Karine Polwart covering some Scottish pop songs and tackling some sacred cows as well.

It is a brave person who would put their own slant on The Whole of the Moon AND Dignity. For my money Whole of the Moon works (helped considerably by Inge Thomson's quirky percussion and backing vocals) whereas Dignity doesn't. You can't improve on perfection I suppose.

She is brave enough to take on a reasonably broad range of songs and not just the classics. So Deacon Blue sit hand in glove  with John Martyn and the Waterboys with Ivor Cutler

The Guardian, being the Guardian looks that bit deeper stating whatever the song, Polwart’s vocals, austere rather than exuberant, tease out underlying themes of resilience and resistance to make a compendium of small-p political pop.

One particularly poignant and brave  cover is her version of Frightened Rabbit's Swim Until You Can't See Land. I think that Scott would have approved

Karine Polwart - The Whole of the Moon