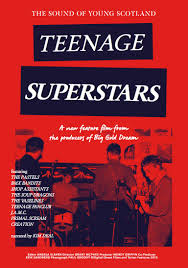 We finally got round to watching Teenage Superstars yesterday a week after it had been featured on Sky Arts and very enjoyable it was too.Good to know that Rupert Murdoch is useful for something

A 2017 docu film about the Glasgow music scene from the early 80s  featuring The Pastels, The Vaselines, Primal Scream, BMX Bandits, The Soup Dragons ,The Jesus and Mary Chain and Teenage Fanclub. Narrated by Kim Deal from Pixies and heavily featuring Thurston Moore from Sonic Youth.

I must admit that whereas I was living and socialising in Glasgow most of these acts, with the exception of Teenage Fanclub, passed me by as I was pretty much immersed in Americana at that time.

However thanks to the blogging fraternity has helped me to fill in some of the blanks. The film and box set of Big Gold Dreams helped as well That and the extensive knowledge of the Scottish music scence from Brian.

It's great to see Scott back blogging and this seems to have inspired him to write a couple of excellewnt posts.

A film that I will certainly retain for future reference.

BMX Bandits - Kylie's Got a Crush on Us