The King of Rock'n' Soul 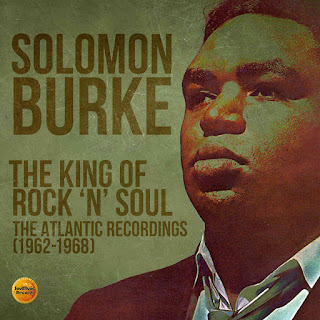 I got hold of a copy of the 3CD Cherry Red compilation The King of Rock'n'Soul  The Atlantic Sessions (1962 -1968) by the mighty Solomon Burke . A whopping 79 tracks for your listening pleasure

If truth be told it is a bit difficult to get your teeth into and I would not recommend listening to it all in a oner.

I was not that familiar with his earliers stuff.The Cherry Red website states that it  celebrates the recordings that Solomon Burke made for the legendary Atlantic Records label between 1960 and 1968. Solomon is generally acknowledged as one of the greatest soul singers to emerge during the genre’s golden days. He signed to Atlantic before ‘soul music’ became a bona fide sub-genre of African-American music and it was Solomon who helped define this new movement and he was, in fact, one of the first artists to use ‘soul’ to describe his music. He would eventually be known the world over as ‘The King of Rock and Soul’.

There are some fillers and some bog standard tunes but a few crackers as well. You could go for quality over quantity and have an excellent single album on your hands.

Solomon Burke - Cry to Me

Solomon Burke - Down in the Valley

Solomon Burke - Looking For My Baby