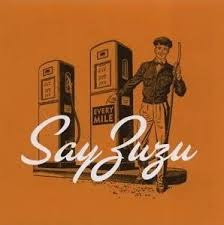 From international superstardom to relative obscurity.

An Americana band from Newmarket ,New Hampshire they first came to my attention via a compilation on the great German Blue Rose label.

This led me to picking up two of their 5 studio albums (there were a further two live albums). 1998's Bull on Broken White Records has featured before so today it is the turn of 2001's Every Mile on Milltown Records in the US and Blue Rose in Europe.

Allmusic gives the album a pretty positive review comparing them to Whiskeytown had they held things together  and stating that they only reasons for the lack of a major breakthrough were that they were from New Hampshire  and they were called SayZuzu.

Certainly when I saw them play a set in Cheapo Records in Austin the audience was almost exclusively European..

The second song featured was the one I first heard on the Blue Rose Collection Volume 9. I enjoyed listening to it, and the rest of the album, again.