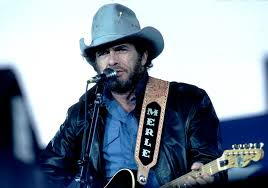 I only have one Merle Haggard album namely 1996. Well maybe I have two as the limited edition CD version I have bought in Polar Bear Records in Kings Heath, Birmingham also includes the album 1994 which was previously unreleased in the UK.

It is pretty much Country by numbers with the best track probably being his cover of Iris DeMent's great No Time to Cry.

Not that you would guess from this but Merle was a bit of a lad in his day getting into all sorts of scrapes and spending a fair amount of time in prison. He attributes witnessing a performance by Johhny Cash while in prison in San Quentin on New Year's Day 1959 as the inspiration to join the prison band and the rest, as they say, is history

His past probably influenced his best song Mama Tried. I've only got this sanitsed version as opposed to the incendiary original with his band The Strangers.

We will park Okie from Muskogee to one side.

Merle Haggard - No Time to Cry