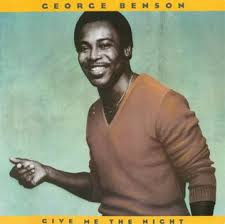 It's Valentine's Day so that calls for something smootchy and Val as you would expect doesn't disappoint.
Some jazz funk from the master of the genre George Benson with his most famous platinum selling 1980 album Give Me The Night. Produced by the mighty Quincy Jones and on his Qwest label  in association with Warner Brothers.
Both the songs featured which reached number 7 and number 10 respectively in the UK singles charts were written by Englishman Rodney Temperton.
George Benson a man so cool that he could get away with wearing a V-neck jumper with nothing underneath it.
George Benson - Give Me The Night
George Benson - Love X Love
Ii
Posted by Charity Chic at 08:00