More Songs About Buildings And Food 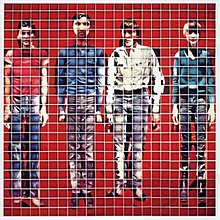 Now, I know what you are all wondering.
If not Bowie what was the second selection in the HMV 2 for £30 sale.
Well wonder no more although given the post title and the picture most of you will have worked it out by now
While I have most of the albums by Talking Heads from the 80's onwards there is a notable gap  as far as the 70's are concerned.
I've got the debut album 77 but what has been missing is what I shall refer to as the Eno 3 namely
More Songs About Buildings and Food, Fear of Music  and Remain in Light which are really all essentials.
I thought I would go for the earliest first. MSABAF is the band's 2nd album from 1978 and as all their records  it is on the Sire label. It is the first of three produced by Brian Eno
I had three of the tracks on The Name of This Band is Talking Heads but the rest are new to me. A fairly radical shift from the debut album to a more funky and dance feel no doubt thanks to the involvement of Eno and highly enjoyable it is to.
One down, two to go.
Talking Heads - Found a Job
Talking Heads - Take Me to the River
Posted by Charity Chic at 08:00