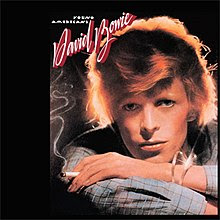 A couple of weeks ago I posted Station to Station by David Bowie  and highlighted that there were more gaps in my Bowie discography which required to be filled.

The first opportunity was quicker than I anticipated as I took advantage of the HMV 2 for £30 on line sale. There were a few Bowie's on offer but the only one I didn't have, or wasn't sold out, was Young Americans which was duly purchased.

From 1975 and like most of his albums on the RCA label it was a pretty radical change of direction from its 1974 predecessor Diamond Dogs.

All glam remnants are long gone as Bowie begins to dabble in funk and soul. As C said in the comments last time round his constant changes of direction is one of his strenghts

Produced by Tony Visconti it is the first of his albums with Carlos Alomar. Luther Vandross and some boy called John Lennon also making an appearance.