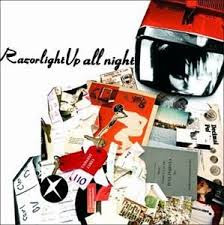 I have one album by Razorlight namely their 2004 debut Up All Night on the Vertigo label. I'm not sure that it has been played at all over the last 15 years.

They have only graced these pages once before in April 2017 when I featured their song In the Morning.

In that post I listed the following facts about the band (which saves me having to write something similar again:

There were a number of comments pretty much agreeing with my assessment of Mr Borrell  along with this  on the nail comment by JC about Up All Night
Great description of Johnny Borrell. I think there's a few half decent tunes on their debut LP but can understand why so many folk donate it to charity shops on the basis they haven't listened to it for years and they only have space for around 30 CDs which is a problem with Coldplay being so prolific..JC
I could be wrong but I think that Dalston may well be one of Ernie Goggins' stomping grounds
Razorlight - Up All Night
Razorlight - Don't Go Back To Dalston
Posted by Charity Chic at 08:00