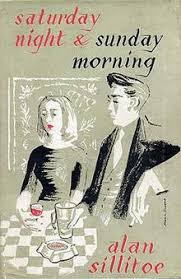 Saturday Night and Sunday Morning is a terrific novel from 1958 from the great Alan Sillitoe. It was subsequently made into an equally great kitchen sink drama of a film in 1960 produced by Tony Richardson and  staring Albert Finney.

Saturday Night Sunday Morning was also the title track of the 1989 album by the band The River Detectives from Craigneuk in Lanarkshire which consisted of the duo Sam Corry and Dan O' Neill,

The Kaiser Chiefs are a band from Leeds as opposed to Craigneuk, named after a South African football team, who are not as good as The River Detectives. Saturday Night is taken from their debut album Employment which I got from a charity shop and which I have probably only listened to once or twice.

Tom Waits is from Pomana, California. The song (Looking for ) The Heart of Saturday Night from the 1974 album of the same name minus the brackets has featured before in this series from Dion. I've also got a version from Madelaine Peyroux but I suspect most of you would rather hear the original.

Finally the greatest of the four acts this week is also from California. The mighty Dave Alvin hails from the town of Downey.I'm not familiar with his album Romeo's Escape so must thank Ernie for providing me with the song I Wish it was Saturday Night.

Tom Waits - (Looking For) The Heart of Saturday Night

Dave Alvin -I Wish it Was Saturday Night