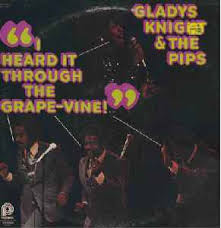 This week on Val's Vinyl  we go from the  Conference League Soul of Maze to the Premiership with Gladys Knight and the Pips.Is the Conference League still a thing?
A temporary blip there from Val.
I came reasonably late to Gladys but there is no denying the quality of her voice.
A slight caveat and apology. This album is on Pickwick and the sound when I was burning it did not sound particularly good.
However it does sound slightly better on my main turntable and the MP3s. A new cartridge for my USB turntable has been duly ordered.
This may result in it being a keeper particularly given that these two songs don't feature on any of my three other Gladys albums
I originally accidentally typed the first song title as Ain't No Sin Since You've Been Gone  which would probably be a different song altogether.
Gladys Knight & the Pips -Ain't No Sun Since You've Been Gone
Gladys Knight & the Pips -Since I've Lost You
Posted by Charity Chic at 08:00