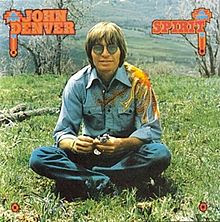 Val is back to soft country rock this week.

I thought that there was more than one John Denver album there but apparently not. It seems though that perhaps Val was a bit late to the party as Spirit from 1976 was his 11th studio album and according to Wiki this album began a downward chart trend for the singer(although it did get to number 13 in Australia).

Allmusic gives it 2 out of 5 which is perhaps over generous. There are better John Denver albums out there

Strangely the  song Spirit which appears on 3 of his albums including the previous one Windsong does not appear on this one.

John Denver - Baby, You Look Good To Me Tonight