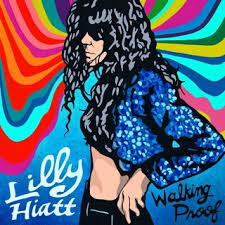 Back to Americana today I'm afraid with Walking Proof the 4th album by Lilly Hiatt released on New West Records.

Lilly is the daughter of  singer songwriter  John Hiatt and his second wife Isabella Wood who sadly completed suicide when Lily was just a baby leading to her being brought up by her father and his third wife.

From what I can gather it seems that, hardly surprisingly, Lily has had her demons. Thankfully it seems that she is now on the straight and narrow.

Walking Proof appears to have been well received with Pitchfork stating that it moves beyond the unadorned Americana of previous albums to arrive at new sounds,moods amd emotions..